Slate Office REIT (OTC:SLTTF) is a Canadian office REIT that has seen its share price drop by about 30% since the start of the COVID-19 outbreak. As Slate is maintaining a monthly dividend at 3.33 cents per unit (C$0.40 per year), the dividend yield has now increased to 11%. This could mean two things: Either Slate’s share price is undervalued, or the dividend will have to be cut.

The equity of Slate Office consists of normal units and Class B LP units which can be converted to normal units on a one-for-one conversion basis. Given this conversion feature, I prefer to include the B units in the share count (although they are technically a liability until they are effectively converted). As such, I will assume Slate has 73.3M units outstanding, consisting of normal units, Class B units and deferred units (see below). The main listing of Slate Office REIT is on the Toronto Stock Exchange where it’s trading with SOT.UN as the ticker symbol, and given the superior liquidity in Canada (with an average daily volume of 140,000 shares), I would recommend to trade in Slate’s units on the TSX, which is clearly the most liquid exchange. The current market cap including the Class B units is around C$270M now (based on a C$3.69 share price as of the time of writing).

I have been keeping an eye on Slate Office since last year as I was attracted by the quality of the tenants. The top 10 tenants make up almost 42% of the rental revenue and amongst those tenants, there are several government-related divisions: 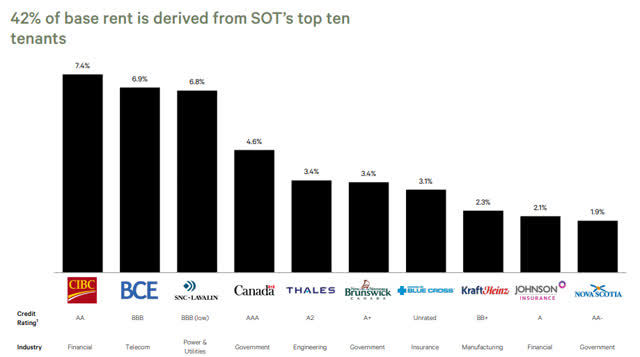 The average lease term of the top-10 tenants is approximately six years, which provides additional visibility on the future rental income. That’s however just for the top-10 tenants as Slate office will have to deal with other rental agreement expiry dates on an annual basis. Approximately 12.5% of the lease agreements will mature in 2020 and 2021 with a more important 13% of the lease agreements coming due in 2022. 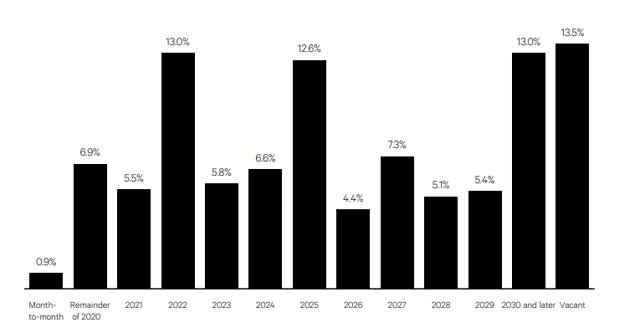 This means the commercial team at Slate will have to work hard the next few years as the rental climate isn’t exactly ideal given the current weak state of the economy and the fact several employers will realize some of the employees can easily work from home. While I don’t anticipate companies will relinquish office space altogether, it’s not too tough to imagine some companies will have plans to downsize their office space requirement. In any case, the maturity dates of leases and signing lease renewals will be an important factor to take into consideration the next few quarters.

Slate Office REIT reported a net loss of almost C$15M in the first quarter, which was predominantly caused by a negative impact of almost C$32M in the change in fair value of financial instruments. Those mainly are unrealized losses on interest rate swaps as the cost of debt has decreased on the markets while Slate hedged its interest rate exposure at slightly higher rates. 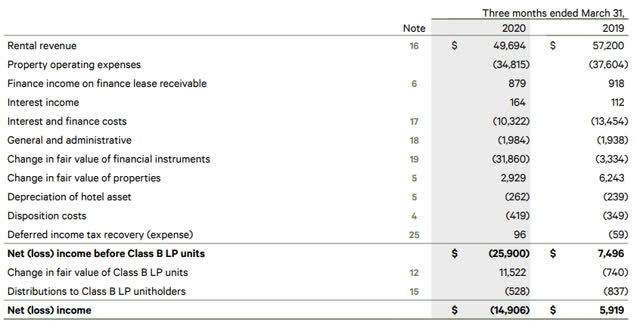 My own NAV calculation

Slate Office REIT boasts an official NAV/share of C$8.61 per share which means that there appears to be an upside potential of almost 150% based on the current share price. Given the “pure” rental income of almost C$24M in Q1 (the total revenue of C$50M also includes certain cost and tax recoveries) which results in an annualized C$96M, the current book value of the properties of C$1.61B means the assets are valued at approximately 16.8 times the gross rental income or a rental yield of approximately 6.9% if we would apply the current occupancy ratio of 86.5%.

This doesn’t sound excessive at all, but I also was curious to see what would happen to the NAV/share and the LTV ratio if I would start using a required rental yield of 7.5%. I will use the annualized rental income of C$96M and the current occupancy rate of around 86.5%. The net debt is C$985M (defined as gross debt minus cash). 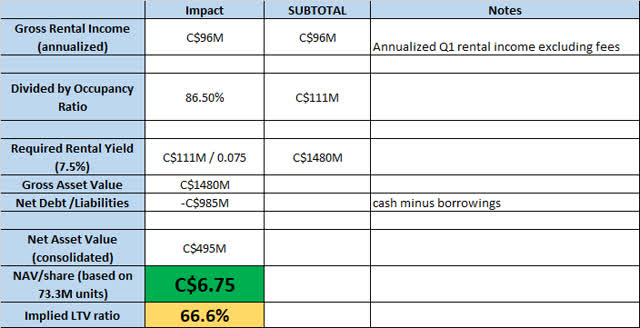 As you can see, the NAV/share is substantially higher than the current share price even after applying stricter rental yield requirements. However, the LTV ratio is a bit worrisome and I fully support Slate’s recent disposals as this has helped the balance sheet.

Slate Office REIT currently pays a monthly dividend of C$0.333/share for an annual dividend of C$0.40. Although this represents a current dividend yield of 11%, the dividend is still fully covered. As you can see in the image below, the AFFO payout ratio has remained comfortably around 60%-65% since the dividend was cut in Q1 2019. 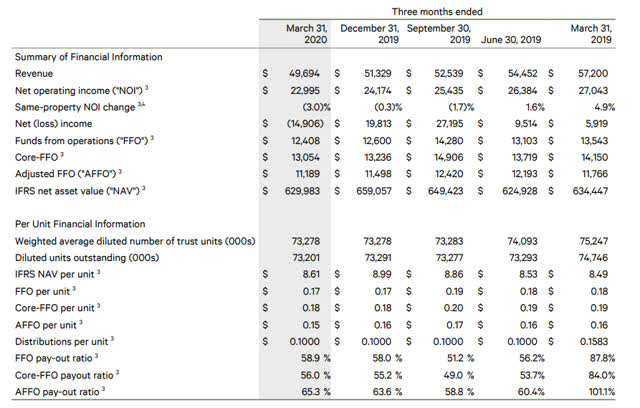 While the dividend is still fully covered, I would like to see Slate reducing its LTV ratio. This could be achieved by selling off additional assets or restarting the dividend reinvestment program whereby shareholders can opt to receive their monthly dividends in new stock rather than cash. However, as the share price is trading at a substantial discount to both the official NAV/share as well as my more conservative NAV, I understand why the dividend reinvestment plan has been suspended.

Considering the dividend is fully covered, I have initiated a speculative long position in Slate Office REIT. Slate looks cheap but will have to deal with several issues in the next few years, including vacancy rates, pressure on rental rates and balance sheet pressure. The LTV ratio has decreased in the past several quarters and keeping cash inside the company will help to keep the balance sheet safe and to keep the LTV ratio under control. That being said, using a required gross rental yield of 7.5% would push the LTV ratio just over 66% which is above my comfort level hence the current qualification as a speculative position.

While I understand the office sector is a difficult space right now and Slate has to deal with the negative perception of approximately 25% of its leases maturing within the next 2.5 years while the REIT is still overcoming a dividend cut in 2019 when the dividend could not longer be maintained, it does look like there’s value in the common shares of Slate Office REIT. The company will have to tackle its occupancy rate which dropped below 87% in Q1 2020 but fortunately the tenants it does have are continuing to pay their leases. Slate received 96% of the rent due in May after receiving 97% of the April rent. No numbers have been shares for the collection of the rent due in June, but Slate will undoubtedly provide an extensive update when it publishes its Q2 results at the end of this month.

I have initiated a speculative long position in Slate Office REIT last week.

Disclosure: I am/we are long SLTTF. I wrote this article myself, and it expresses my own opinions. I am not receiving compensation for it (other than from Seeking Alpha). I have no business relationship with any company whose stock is mentioned in this article.

COVID-19 vaccines are on the fast-track to approval. How will we know they’re safe?