Microsoft Is Firing On All Cylinders (NASDAQ:MSFT)

Microsoft (MSFT) continues to surprise me, and this has been going on for many years. The company is a compounding cash machine and ticks all of my boxes. Not only this, MSFT is also resilient with respect to the coronavirus. My strict investment criteria, with respect to blue chips, has served me well over many years. I look for companies with sustainable operating cash flow sufficient to cover most, if not all, of the following:

On 17 March 2020, I published a bullish article on Microsoft entitled ‘Microsoft: Taking Advantage Of The Sell Off, But With Caution’. Since then (price at publication: $146.57), the return has been in excess of 25%.

Even though investor sentiment has markedly improved over the past month or so, as evidenced by rising markets globally, we still have a very long way to go before returning to normality. This is not the time to be complacent and go all out. Most of my MSFT purchases this year were in the high $140 zone. I decelerated my rate of purchases in the $160 zone and, since then, I have not added to my position.

The most recent earnings results were very strong (once again), with MSFT delivering double-digit top line and bottom line growth, driven by strength in commercial cloud. Diluted earnings per share increased by more than 20%. Even though most companies have experienced significant financial pain from COVID-19, which impacts every aspect of our work and life, MSFT has not really been impacted. In fact, the company assumes that the remote work tailwinds will continue through the quarter. For example, Microsoft Teams use surged 1,000% during March.

Not only that, MSFT continues to reward shareholders, returning $9.9Bn, up 33% YoY, with $6Bn in share buybacks and $3.9Bn in dividends. Not a bad position to be in during the most challenging times in modern history. MSFT can take pride in that it is “business as usual”, at least financially. This is certainly not the case with other companies/sectors. Many companies are cutting pay and furloughing employees. Some unfortunate companies are in zero-revenue mode. Events, like the following, will likely dominate the news in the coming weeks/months, especially in more hard-hit sectors:

Lockdown measures are starting to be lifted, but it will take time until we see meaningful signs of recovery and normality being restored. This was also echoed by Dr. Fauci, who said on CNN “it is not going to be a light switch that we say, ‘Okay it’s now June, July whatever’ – click, the light switch goes back on”. While other companies are trying to stand on their feet and survive, MSFT is planning its future, on multiple fronts. For example, MSFT announced it is investing $1.5Bn to accelerate digital transformation in Italy, including its first cloud data center region. Earlier this week, MSFT announced its first data center region in New Zealand, in addition to a $1Bn investment in Poland as well as new product releases e.g. the Earbuds to compete with AirPods:

It is important to reiterate that all of the above events took place in the past week alone. In other words, while other companies are struggling to survive, MSFT is looking ahead to thrive, aided by a fortress balance sheet and strong free cash flow generation. MSFT continues to be a cash flow monster, generating in excess of $50Bn per annum in cash from operations (versus ~$24Bn p.a. in 2010): 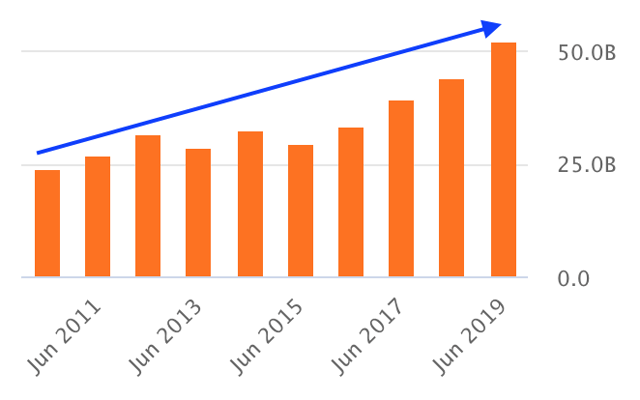 Going forward, I expect MSFT to experience continued growth across key segments, products and categories (organically as well via M&A), further boosting operating cash flow. This strong cash flow generation also allows the company to continuously improve its balance sheet. MSFT’s cash balance (including short-term investments) has been consistently above the $130Bn mark since 2017; currently stands at ~$137.6Bn (versus ~$134.2Bn in the previous quarter).

In fact, the most recent cash balance reading of ~$137.6Bn is the second highest in the company’s history (the record was reported in 2017: ~$138.5Bn). Even though MSFT has experienced positive YoY growth on its year-end cash balance reading each year since 2010, the past 3 years have been stagnant. 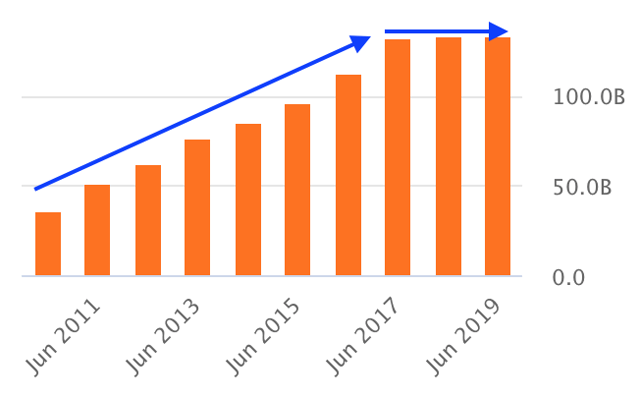 This “stagnancy” is self-imposed, in a good way. If MSFT wanted to boost it cash balance further, it could. However, the company has opted to invest heavily in growth initiatives as well improve existing services/products (digital transformation, cloud, etc.). This is evidenced by the company’s annual CAPEX spending, which has increased more than seven-fold since 2010: 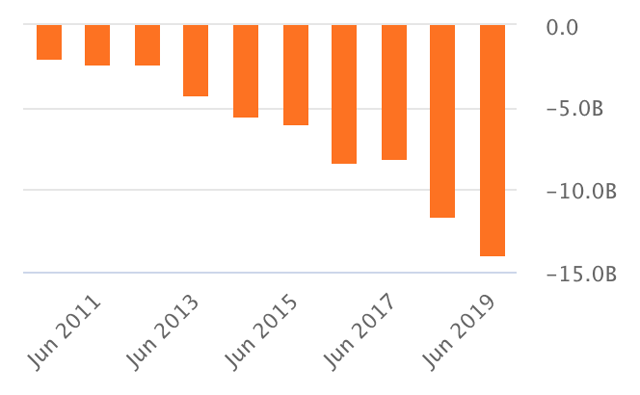 What’s more, this self-imposed “stagnancy” in terms of the flattish cash balance is also attributed to the pace of repurchases and dividends. Even though repurchases are more volatile (depending on market conditions, etc.), the dividend policy is predictable and progressive. MSFT has increased its per-share dividend from $0.32 per annum in 2004 to $2.04 per annum today, a more than sixfold increase (more than 13.5% 10 Year CAGR growth rate):

The generous dividend increases now cost the company ~$15Bn per annum (versus less than ~5Bn in 2010.). 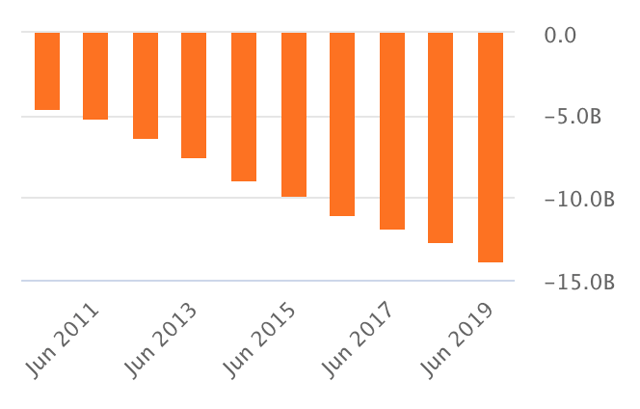 I have no doubt in my mind that per-share dividends will continue to increase at a very attractive pace going forward (all else constant) and long-term income investors stand to benefit tremendously. However, as mentioned previously, this is not the time to be complacent. Most of my MSFT purchases this year were in the high $140 zone, reflecting a dividend yield of ~1.4%, which was higher than all US treasury rates at the time (5, 10 and 30 year). In today’s depressed market, this is a fairly good signal of attractive relative value. In other words, “buy the big dip”.

What’s more, as MSFT’s per-share dividend increases over time at an attractive pace, the yield-on-cost over the long run becomes very appealing. For example, over a 10-year period the yield on cost has exceeded 7%:

In other words, those who bought 10 years ago have had a good run in terms of the dividend alone. I expect this trend to continue, albeit at a slower pace. The best way to maximize this strategy is to buy small chunks regularly over time and increase the weighting during large sell-offs, all else constant, in order to lock in a higher average dividend yield.

It goes without saying that if MSFT scaled back on capex, dividends and share repurchases, cash hoarding would go through the roof. However, I advocate a balanced approach like in the previous quarter, which takes into account dividends, share repurchases, growth initiatives as well as preserving a rock-solid balance sheet. In the previous quarter, even though the quarterly cash balance increased (nice position to be in), Total Liabilities decreased over the same period, from $172.7Bn to $170.9Bn, after taking into account share repurchases, dividends and CAPEX (an even nicer position to be in).

In closing, as has been the case in the past, I expect MSFT’s cash balance to keep on increasing over time, net of maintenance capex, dividends and buybacks, all else constant. In today’s depressed environment, I view cash hoarding as a net positive, especially if it arises after rewarding shareholders and taking into account all company needs, current and future, while not compromising the balance sheet. In any event, it is fair to say that given MSFT’s strong cash position and cash flow generation, MSFT has the ability to survive in any environment and take advantage of opportunities as they present themselves.

Disclosure: I am/we are long MSFT. I wrote this article myself, and it expresses my own opinions. I am not receiving compensation for it (other than from Seeking Alpha). I have no business relationship with any company whose stock is mentioned in this article.

The First Shot: Inside the Covid Vaccine Fast Track

The Coronavirus Outbreak is Overwhelming to People’s Mental Health

The Coronavirus Outbreak is Overwhelming to People's Mental Health