The Quest To Find Signs Of Ancient Life On Mars

Facebook, Inc. (FB) made headlines in the last few months for all the right reasons. Investing in Jio Platforms, launching Messenger Rooms and Facebook Shops, and the rollout of WhatsApp Pay in Brazil are a few of these positive developments. Things, however, have taken a U-turn over the last few days as advertisers, including many billion-dollar brands, have decided to boycott Facebook in light of the company’s reluctance to handle misinformation and hate speech on its platforms. Facebook stock has dropped around 10% over the last 5 trading sessions, and I’m not surprised by this initial reaction of investors. The market, however, is supposed to be forward-looking. My track record on Facebook has been stellar so far, and I’m confident that buying the dip this time around will prove to be the right decision in the long run. In this article, I will discuss two reasons that highlight the anomaly between the market reaction and the economic reality of advertisers deciding to boycott Facebook.

Empirical evidence that could make you feel better

I’m not betting on history repeating itself, but I’m a strong believer in extrapolating past results to get an idea of the likely outcome of an unknown event. Here are two instances on which I suggested investors look through the noise.

Seeking Alpha Premium has this cool feature to evaluate the performance of an article based on the published date. Here’s how the articles in question have performed since I published them. 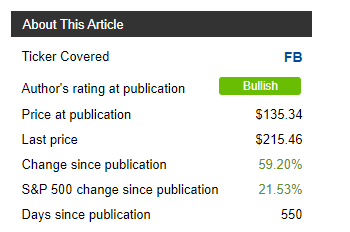 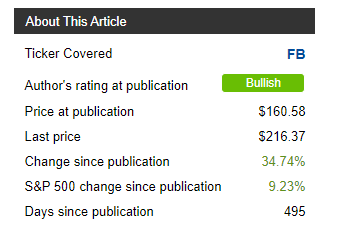 Here are two reasons why things could be quite similar this time around.

Well before deciding to boycott Facebook, many large companies had decided to cut their advertising budget for this year as a result of the virus-induced recession. It’s common investing knowledge that discretionary spending declines drastically during a recessionary environment, prompting corporate America to cut back on advertising dollars spent to take their products and services in front of their target markets. This makes it clear that the opportunity cost of deciding to boycott Facebook is comparatively low as the advertising budgets of many companies were bound to be cut in reaction to the expected dip in consumer spending.

An investor who believes that Facebook will be permanently hit by this movement will inadvertently have to believe in either one of the below two outcomes.

As far as I believe, none of these risks will materialize. There is no question whatsoever of an alternative social media company outpacing Facebook in the foreseeable future. The online advertising market, on the other hand, is expected to grow at a compounded annual growth rate of 21.6% through 2025. There are multiple tailwinds driving this industry, such as the expected increase in the internet penetration rate in Asian countries and the growth of concepts such as the Internet of Things (IoT).

The many companies (here’s a list) who have decided to conveniently boycott Facebook amid a recession will, in my opinion, find no other option but to get back on board once consumer spending starts gaining traction, which wouldn’t be too far away.

Before I move on to the next segment of this analysis, I thought it is best to address another concern raised by investors: how long would it take for advertising dollars to come back to the market?

Here’s a snapshot of what happened during the global financial crisis. 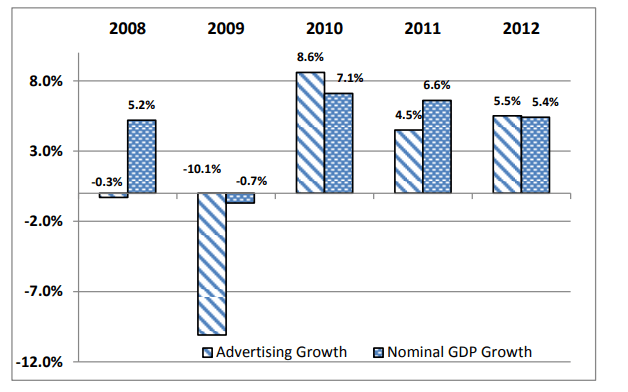 The price action in the last few trading sessions suggests that the market is overreacting to the expected decline in advertisement revenue in the next few quarters. The outlook for the long term, however, seems little changed.

Reason 2: Facebook’s policy changes will prove to be value accretive in the future

Facebook is already making progress in addressing the issues raised by advertisers. In light of the many concerns raised by advertisers and users regarding the outdated nature of many news articles shared by users to promote their views, the company announced an update to its platform in which a user would be notified if an attempt is made to share an article that is older than 90 days. 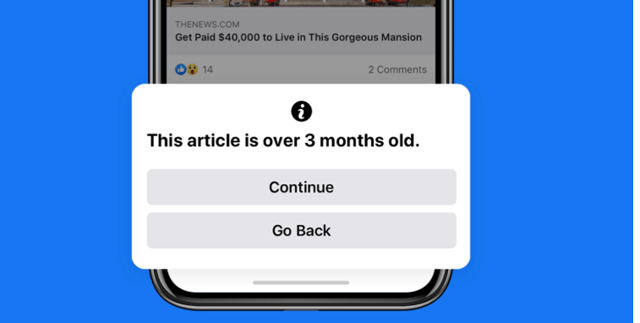 This is a baby step in making Facebook a better platform for accessing time-sensitive news articles.

On the same day, Facebook CEO Mark Zuckerberg unveiled a plan to meet the “unique challenges” of the 2020 elections. In this detailed update, the CEO introduced a four-pillar plan to achieve the objective of giving life to feedback received from civil rights organizations and communities.

The same way I was bullish on Facebook spending billions of dollars to improve security measures in 2018, I am optimistic that these recent changes will enable the company to improve the power of its brand in the coming years. This expected improvement in trust among all stakeholders coupled with its market-leading position in the social media space will only help Facebook bring in billions of dollars for decades, if not more.

Known as the ‘Dean of Valuation’, professor Damodaran is considered to be one of the most influential figures on corporate valuation techniques. Besides being an academic, the professor is a shrewd investor who has had massive success with investing in high growth companies. For instance, his investment in Apple Inc. (AAPL) in 1997 at a price below $5 per share proved to be a genius move. In an interview with Barron’s on June 25, Damodaran opened up about his current investment in Facebook and said:

I like Facebook because I think it will continue to deliver those advertising revenues because it’s the way the world is evolving. We get our news from social media. We get our entertainment from social media. And when you’ve got two billion users who spend an hour every day on your platform – and I’m not even counting the WhatsApp revenues that are going to come in the future – I think you have a money machine.

Taking into account both the positive and negative developments in the last couple of months, I have decided to tweak the long-term revenue growth rate higher as I believe the monetization of WhatsApp will add a new stream of revenue for the company. At the same time, I expect the company to take a hit in the short run as a result of advertisers boycotting social media companies and the expected decline in advertising industry revenue. In January, I arrived at an intrinsic value of $276 per Facebook share, and the latest adjustments to my model result in a value of $303 per share. This represents an upside of 39%.

I am convinced that Facebook is cheap at the current price level. The sentiment toward the company, however, could continue to deteriorate in the next few weeks as the movement to boycott social media is likely to gain traction. If the stock price dips below the $200 mark, I would not hesitate to add to my position. In case the stock never reaches such lows, I would happily enjoy the gains until the stock surges above my intrinsic value estimate of $303.

I thought of ending this analysis with something Peter Lynch had to say about investing in the stock market.

Time is on your side when you own shares of superior companies.

If you enjoyed this article and wish to receive updates on my latest research, click “Follow” next to my name at the top of this article.

Disclosure: I am/we are long FB. I wrote this article myself, and it expresses my own opinions. I am not receiving compensation for it (other than from Seeking Alpha). I have no business relationship with any company whose stock is mentioned in this article.

A new theory about political polarization

The Quest To Find Signs Of Ancient Life On Mars