A lot of shareholders thought that Energy Transfer (ET) won at least a partial reversal of the order to empty the pipeline when the appeals court issued a stay. Not so fast. The appeals court is not new to this whole dispute and further warned the defendants:

The court further “unburied the hatchet” with this follow-up:

The conservative position has long been that the district court overreached. But what many conservatives fail to realize is that ever since the initial ruling four years ago, this DAPL pipeline dispute has not gone in favor of the defendants. Now, it’s getting to the point where the defendants have a limited ability to appeal the initial ruling on the defective permit.

Anytime that someone begins to pile up losses through the various motions and appeals that are a normal part of the situation, then each successive try generally has less chance to succeed and more chances of raising the ire of the appeals court through perceived procedural delays.

“FURTHER ORDERED that this panel retain jurisdiction over any further motions for stay pending appeal. We expect appellants to clarify their positions before the district court as to whether the Corps intends to allow the continued operation of the pipeline notwithstanding vacatur of the easement and for the district court to consider additional relief if necessary.

The district court opinion did reference several things that the defendants tried. These attempts largely ended in failure. There’s now four years of history to go with the case that made the headlines. The district court now has some additional “homework” to do. But the basic structure of the district court decision remains along with a warning by the appeals court that the stay is likely to be temporary.

More importantly, the constitution orders the executive branch to carry out the laws of the legislature. The courts will interpret those laws. So far the Army Corps of Engineers has failed miserably to even begin to fulfill the requirements of the district court order. It’s one thing to provide motions but when all else fails the court decision needs to be satisfied the next time there is a court appearance.

Unfortunately for the Army Corps of Engineers, this is nothing close to the first try. The part that Energy Transfer plays in this is that they are on the side of the defendants. 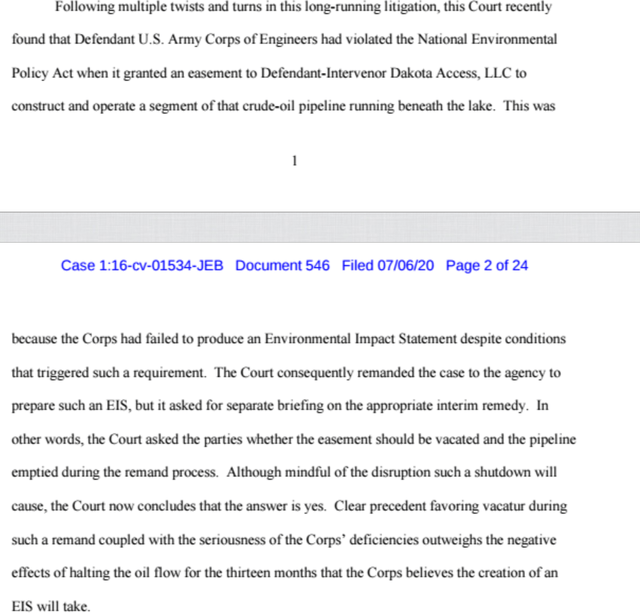 Notice that the court expected the Army Corps to do an EIS even though the original order did not specify an EIS. The reason is that the court thought originally that the Army Corps of Engineers would be able to satisfy the 2017 court decision without an EIS. But the last four years evidently proved otherwise. Therefore an EIS became the only way to satisfy the original court order.

Yet the Army Corps Of Engineers came to court without that EIS (Environmental Impact Statement) nor with any other means to satisfy the original order. Therefore the court basically ordered a solution to the first order to make it clear to the Corps exactly what was expected by the district court. The key thought here is that an EIS became necessary when nothing else worked. As is noted before the “vacatur” solution is actually a fairly standard remedy in the current situation. It’s especially noteworthy because the coronavirus demand destruction has caused excess pipeline capacity to become available. Therefore the absence of the DAPL pipeline capacity is not the issue it once was during busier upstream activity periods.

As noted above, the district court itself has spent plenty of time on this case. This is by no means the only reference. Energy Transfer is listed as a defendant along with the Army Corps in the district opinion and in the appeals court as well. The evidence is overwhelming that Energy Transfer management knew exactly what risks the management decisions entailed before and during this whole process.

What’s happening is that with each process, the chances of overturning the original 2017 order decline. What’s really left is an argument over whether the “empty the pipeline” order is indeed proper or whether the penalty accruing from the empty pipeline is excessive. Therefore anyone who hopes for a change or complete abandonment by the court for that EIS has to realize that there’s a history that has failed to change or cause the EIS requirement to become null and void. The appeals court warned the defendants in the first quote shown in the article that their chances are not good.

Anyone who persists with an appeals such as Energy Transfer management now persists and loses runs the risk of a frustrated or angry court adding to any penalties. Frivolous court moves are generally looked upon with disdain once the case is completely over. Therefore from the view of Energy Transfer management this case is probably leading to steadily increasing liability. The management effort should have been to motivate the Army Corps of Engineers to produce and EIS to get this situation into the rearview mirror with as little damage as possible.

The most obvious potential liability is removal of the pipeline from the area of the defective permit. The pipeline itself would likely have to be empty and the land would have to be put back into the condition it was before the pipeline was placed there.

Another potential liability would be moves by the partners to place responsibility for this on the operating partner which is Energy Transfer. Such a scenario would possibly make Energy Transfer liable for damages in certain situations. The situation could be very costly if the partners sue for their money back.

The last potential liability would be the damages assessed for all of this that would be payable to the plaintiffs.

The appeals court has now warned the defendants that their chances of prevailing have effectively declined. These court maneuvers will now more likely focus on the “vacatur” remedy. That remedy happens to be fairly common and straightforward in many cases.

Should that vacate remedy prove costly, investors need to remember that Energy Transfer management is paid to avoid such costly possibilities.

Some have pointed to other pipelines operating successfully as well as the location of this pipeline. The focus instead needs to be on this pipeline and the requirements for this pipeline to be allowed to operate. Right now there’s an improperly-issued permit.

The business world has evolved such that anyone receiving a permit needs to make sure that permit has been properly issued with all the correct stamps and signatures. It appears to fall under the “ignorance of the law is no excuse” clause.

How this case turns out will have a significant effect on the stock price and the dividend. This has become a very dangerous partnership to invest in at just about any level.

I analyze oil and gas companies and related companies like Energy Transfer in my service, Oil & Gas Value Research, where I look for undervalued names in the oil and gas space. I break down everything you need to know about these companies — the balance sheet, competitive position and development prospects. This article is an example of what I do. But for Oil & Gas Value Research members, they get it first and they get analysis on some companies that is not published on the free site. Interested? Sign up here for a free two-week trial.

Disclosure: I/we have no positions in any stocks mentioned, and no plans to initiate any positions within the next 72 hours. I wrote this article myself, and it expresses my own opinions. I am not receiving compensation for it (other than from Seeking Alpha). I have no business relationship with any company whose stock is mentioned in this article.

Additional disclosure: Disclaimer: I am not an investment advisor (or a lawyer), and this article is not meant to be a recommendation of the purchase or sale of stock. Investors are advised to review all company documents, and press releases to see if the company fits their own investment qualifications.

What Can CEO’s do About it? > CEOWORLD magazine

Ok, ok, we’ll stop listening in on your Siri conversations. For now, but maybe in the future • The Register