The official launch of the PlayStation 5 console was a very important moment for Advanced Micro Devices (AMD). The console business has always been an important part of the AMD story and weak sales in that segment have undermined some major improvements in other business lines for the chip company. My investment thesis remains very bullish due to the combination of higher sales in the console and data center segments boosting AMD to my $70 target.

Sony’s (SNE) PlayStation 5 will go head to head with Microsoft’s (MSFT) Xbox Series X console with both slated for release during this 2020 holiday season. AMD has long made the APU chips for consoles that feature a CPU and GPU.

Both major console platforms last released new consoles back in 2013. For this reason, AMD saw peak sales in the EESC segment back in Q3 ’16. The EESC segment stands for Enterprise, Embedded and Semi-Custom which includes sales for data center servers and consoles making the individual amounts sometimes difficult to derive.

The company has seen a resurgence in server chip demand following the release of EPYC chips in 2018, but the revenue improvements have been offset by declining console chips sales. Due to the holiday demand surge for consoles, AMD typically sees peak Semi-Custom sales during Q3. The segment saw revenues top $800 million during both 2016 and 2017, but the number dipped 27% YoY to only $525 million last Q3. 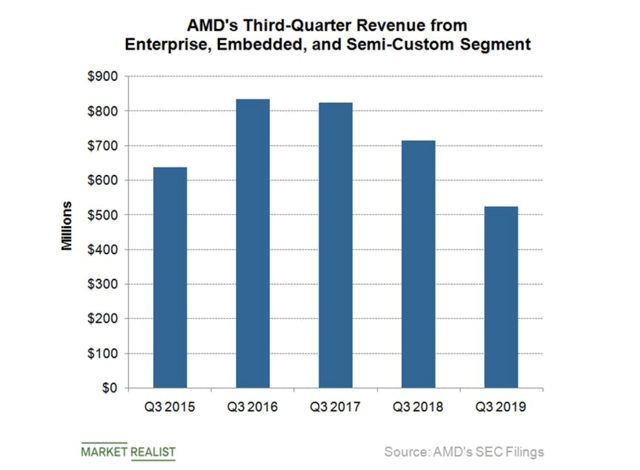 So, despite the improving EPYC processor sales in 2019, the results were buried in a segment that saw sales dip nearly $200 million from Q3 ’18. The upcoming quarter will be the first Q3 since data center sales last peaked in 2006 when AMD had both strong console sales and data center sales.

The below chart better represents how AMD has transitioned to a force in the chip sector while their main business in the pre-2017 period has seen revenues decline. NextPlatform has estimated the total data center revenues per quarter, and when subtracting out these revenues, one can see how Semi-Custom chip sales have dipped from over $750 million in Q3 ’16 to around $250 million last Q3. 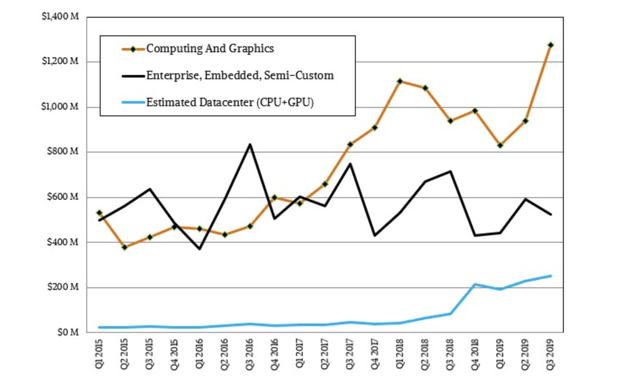 Last Q3, Computing & Graphics revenues were $1.28 billion. The EESC segment only needs to return to the 2016 and 2017 peaks above $800 million to approach the analyst targets of $2.3 billion this Q3 while the revenue target this year includes substantial data center revenue with AMD gaining market share with the EPYC 2 chip.

The new gaming cycle is expected to have higher ASPs and margins, suggesting AMD was able to negotiate better terms this cycle when the company wasn’t reliant on the chips for ultimate survival back in 2013. At the recent Bank of America conference, CFO Devinder Kumar had this to say about the console business:

“So it’s really a good long-term growth business for us from 2021 into the 2023, 2024 time frame. And that is something that we look forward to. And then as far as ASPs and margins, which is a question that comes up a lot, there’s a lot of technology going to these machines. The ASPs and margins will be a bit higher than prior generations, but these are still semi custom products. They are a portion of the R&D based on NRE model we have with these customers, is paid by the customer.”

With the potential surge in both console and data center sales, the predicted 26.8% growth in Q3 appears low. Before the virus shutdown, analysts had AMD predicting revenues of $2.4 billion. The estimates have been cut by nearly $140 million.

AMD only needs about 10% revenue growth in the Computers & Graphics segment along with $850 million from EESC to reach the Q3 target. Upside exists from all of the segments, allowing for the chip company to have a blowout quarter.

My $70 target has AMD hitting a $11.5 billion revenue target for 2021 versus analyst estimates of only $10.2 billion. The company has the potential to blow past the analyst numbers with the rebound in console sales while server CPU sales explode higher as well. The company is looking good for hitting a $2 EPS next year.

The key investor takeaway is that AMD is now aligned for breakout sales in the 2H of 2020. The launch of the PS5 and Xbox Series X finally sets the company up to fire on all cylinders.

The stock appears expensive here trading at 35x 2021 EPS estimates, but the company has plenty of upside to existing analyst estimates and a long runway of growth ahead.

Looking for a portfolio of ideas like this one? Members of DIY Value Investing get exclusive access to our model portfolios plus so much more. Signup today to see the stocks bought by my Out Fox model during this market crash.

Disclosure: I/we have no positions in any stocks mentioned, and no plans to initiate any positions within the next 72 hours. I wrote this article myself, and it expresses my own opinions. I am not receiving compensation for it (other than from Seeking Alpha). I have no business relationship with any company whose stock is mentioned in this article.

Additional disclosure: The information contained herein is for informational purposes only. Nothing in this article should be taken as a solicitation to purchase or sell securities. Before buying or selling any stock you should do your own research and reach your own conclusion or consult a financial advisor. Investing includes risks, including loss of principal.

A raft that won’t save you